The Nike distribution center in Laakdal, Belgium, is one of the largest distribution centres in Europe, and the logistical hub of Nike EMEA, home to all logistical activities coordinated between 700 factories and 25,000 customers. During a large expansion of this facility in 2019, Nike Europe extended its customer service centre by adding a new building for storing and handling clothing, fashion products and sports equipment.

A highly advanced automated 3-tiered warehousing facility has been added for storing and handling goods, an office block with social amenities and a technical facilities area. Like the original building constructed 12 years earlier, the entire new site has been built using sustainable materials and energy-efficient operations.

Following the opening of the new facility, it became clear that due to its sheer size, the team working inside some of the warehousing areas required means of wireless communication with their main office.

Contacta’s partner in Belgium, PVS NV, had a working relationship with the site and had suggested trialing the Contacta RF wireless communication system. In a planning meeting with the technical team at Contacta in 2019 concerns were raised about the high level of electromagnetic and other devices operating inside the facility, and whether these would affect the performance of the RF system. 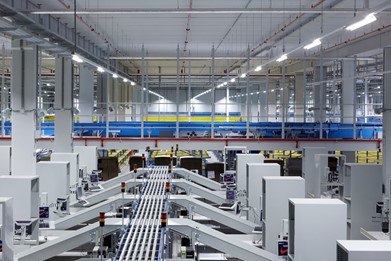 As the Contacta RF system has access to 40 different channels on the 2.4GHz frequency, the team was confident there will be plenty of scope to handle any possible interference. A test was conducted on-site using a Contacta RF-TXS Transmitter and RF-RX1 Receivers. The systems performed very well to the full satisfaction of the Nike staff using them.

The customer purchased two RF-TXS fixed transmitters, which supported flexible wireless communication in two areas of the facility. Workers have been supplied with 20 RF-RX1 Receivers and a variety of listening options. Two RF-DC20 charging cases have also been supplied for convenient drop-in recharging of the units.

The ability of the Contacta RF system to work on a wide range of channels meant each area has been programmed on a different channel without interference.

‘We have been using the RF products since the very start… the systems performed very well in these dense metal environments.’

This website uses cookies to improve your experience while you navigate through the website. Out of these, the cookies that are categorized as necessary are stored on your browser as they are essential for the working of basic functionalities of the website. We also use third-party cookies that help us analyze and understand how you use this website. These cookies will be stored in your browser only with your consent. You also have the option to opt-out of these cookies. But opting out of some of these cookies may affect your browsing experience.
Necessary Always Enabled
Necessary cookies are absolutely essential for the website to function properly. This category only includes cookies that ensures basic functionalities and security features of the website. These cookies do not store any personal information.
Non-necessary
Any cookies that may not be particularly necessary for the website to function and is used specifically to collect user personal data via analytics, ads, other embedded contents are termed as non-necessary cookies. It is mandatory to procure user consent prior to running these cookies on your website.
SAVE & ACCEPT
Get In Touch